An estimated 54 million people left the middle class in the past year, while some 131 million fell into poverty, according to a new study from the Pew Research Center.

Among the most notorious consequences of the covid-19 pandemic are changes in the economy at the macro and micro levels. A new study from the Pew Research Center , based on data from the World Bank , found that the middle class shrank worldwide , while some 131 million people fell into the category of poverty.

According to analysts, 54 million individuals ceased to belong to the middle class , compared to pre-pandemic data. The middle class is understood as people with an average income of 10 to 20 dollars a day . It is estimated that in the world there are about 1,324 million members in this socioeconomic range.

East and South Asia , as well as the Pacific region, is where the reduction of the middle class was most noticeable, with 51 million people affected in total . This slowed down the economic growth that they maintained during the years before the pandemic.

On the other hand, the study concluded that some 131 million people fell into poverty . That is, they now earn $ 2 or less a day . South Asia, in particular India, as well as sub-Saharan Africa, recorded the largest increase in poverty levels. 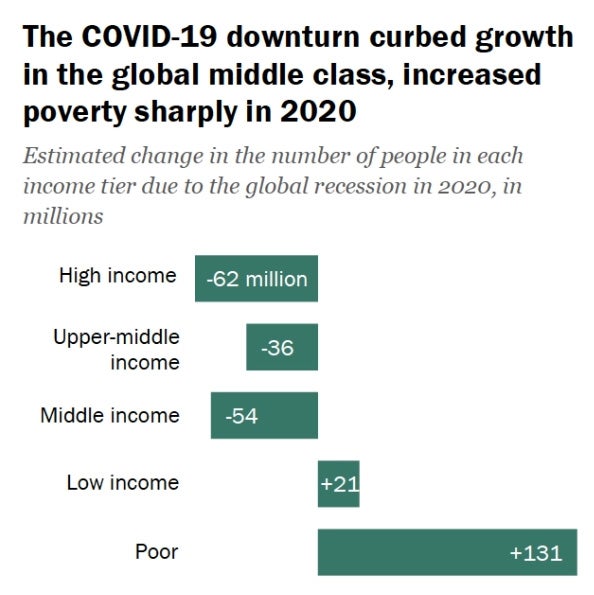 Estimated changes in the number of people at each income level due to the global recession in 2020 in millions. Image via Pew Research Center .

Unlike other regions, in countries with advanced economies the middle class increased by 16 million . This is largely due to the reduction in the number of people with high incomes (who earn more than $ 50 a day), as 62 million stopped belonging to this sector.

The study authors do not predict a very positive outlook for the near future.

“The economic recession is likely to have lowered living standards around the world, driving millions of people out of the world’s middle class and swelling the ranks of the poor. At the same time, the road to recovery is fraught with uncertainties ” , the specialists conclude in the report.

Verizon is giving its customers 12 free months of Disney+

American Airlines Drops 15 US Cities in Their Operations This Fall