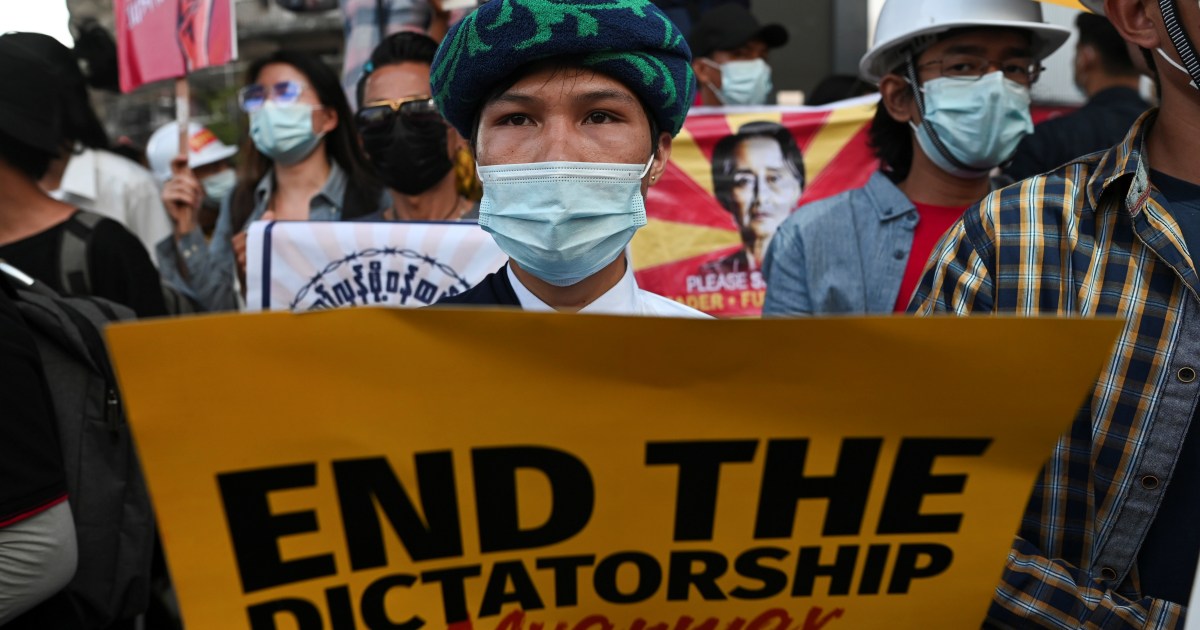 Facebook deleted the main page of Myanmar’s military for inciting violence while Antonio Guterres, secretary-general of the United Nations, joined the United States, the United Kingdom, France and Singapore in denouncing the shootings at a shipyard in Mandalay.

“The use of lethal force, initimidation and harassment agains

The backlash came as protesters returned to the streets of cities and towns across Myanmar, demanding an end to military rule and the release of detained de facto leader Aung San Suu Kyi.

Myanmar’s military, known as the Tatmadaw, seized power on February 1 after alleging fraud in an election that returned Aung San Suu Kyi’s National League for Democracy (NLD) to power last November. The takeover came a decade after the end of nearly 50 years of strict military rule, and has prompted a general strike and demonstrations in cities and towns across Myanmar.

One victim was shot in the head and died immediately, according to the Frontier Myanmar magazine, while another was shot in the chest and died en route to the hospital. An emergency worker told AFP news agency that 30 others had been wounded, with half of the injuries caused by live rounds.

Thomas Andrews, the UN special Rapporteur for Myanmar, said he had received reports that the Tatmadaw’s 33rd Light Infantry Division was involved in the shootings. That unit was responsible for the campaign of mass killings, rape, and arson that forced 730,000 members of the Rohingya ethnic minority into Bangladesh in 2017. Andrews called the shootings “a dangerous escalation by the junta in what appears to be a war against the people of Myanmar”.

The 33rd Light Infantry Division was reportedly involved in the lethal attacks in Mandalay today – the same division responsible for mass atrocity crimes against the Rohingya in 2017. A dangerous escalation by the junta in what appears to be a war against the people of Myanmar.

The United States, United Kingdom, France and Singapore have all expressed concern over the shootings, with British Foreign Secretary Dominic Raab threatening “further action” and the Singaporean foreign ministry warning of “serious adverse consequences for Myanmar and the region” if the situation continued to escalate.

The shooting of peaceful protesters in Myanmar is beyond the pale. We will consider further action, with our international partners, against those crushing democracy & choking dissent.

Myanmar’s military government – led by Senior General Min Aung Hlaing – has so far remained impassive in the face of the relentless backlash, with the US, UK, Canada and New Zealand announcing targeted sanctions on military leaders.

European Union foreign ministers will meet Monday to discuss their own measures against the military.

Al Jazeera’s Tony Cheng, reporting from Bangkok in neighbouring Thailand, said it was not yet clear if Saturday’s shooting was intended as a “warning shot to protesters across the country or if this is the start of a much wider crackdown”.

“The campaign of civil disobedience appears to be having a fairly profound impact – people are refusing to go to their jobs and that’s affecting the transport systems and the banking systems particularly badly,” he said.

“We understand that the railways in Yangon are now effectively shut down. We’ve heard that flight schedules for domestic flights in Myanmar have closed down, with pilots refusing to turn up. Many civil servants are not going in to work, and while this is a huge problem for the general public, it is also a major problem for the military.

“It seems most people are determined to put up with these discomforts if it forces out the military. That is going to push the military into a corner, where they will either have to come out fighting or they will have to back down.”

Nearly 570 people have been detained since the coup, according to the Assistance Association for Political Prisoners monitoring group.