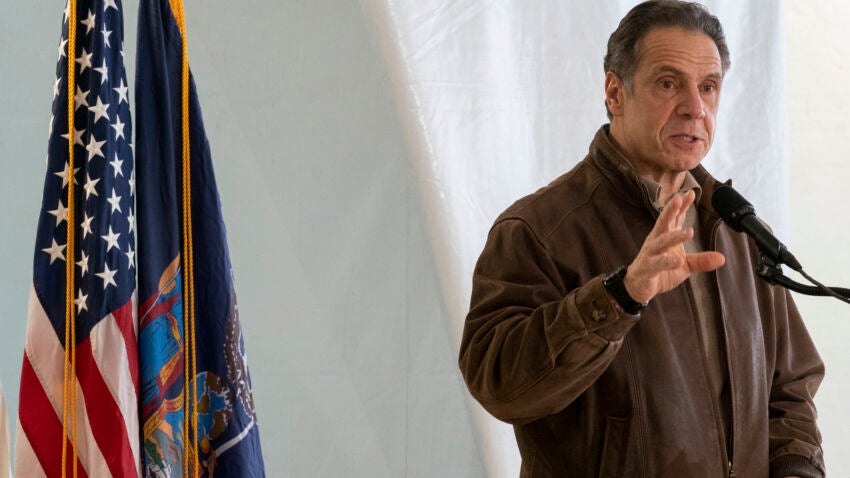 ALBANY, N.Y. — The Democratic leaders of the New York state Senate are moving to strip Gov. Andrew Cuomo of unilateral emergency powers granted during the pandemic, setting up a remarkable rebuke for the governor from members of his own party.

The Senate’s measures, which could be voted on as soon as next week, underscore the deepening division between Cuomo and state lawmakers since the governor admitted to intentionally withholding critical data on virus-related deaths from the Legislature.

The moves came even as it emerged that the FBI and the U.S. attorney for the Eastern District of New York had opened an inquiry into the Cuomo administration’s handling of nursing homes during the pandemic. It was not known whether the inquiry, which was confirmed by three people familiar with the matter, was focused on Cuomo or any individual, only that it was in it earliest stages.

The inquiry was another clear indication of how the climate has shifted dramatically for Cuomo since March 2020, when he emerged as a prominent voice in the health crisis, using his daily briefings and invocations of his family to inform and calm a nation of viewers who turned to him as the virus began to spread. Now, much of that good will has evaporated.

The Senate’s action also illustrates a deepening fatigue in the Democratic-controlled state Legislature over Cuomo’s broad use of powers, which have enabled him to control nearly every facet of the state’s response to the virus, from ordering widespread shutdowns to managing the distribution of vaccines to feuding with state health officials.

Lawmakers had been discussing limiting the governor’s powers earlier this year, but those efforts were given new momentum as the controversy over nursing homes engulfed the Cuomo administration over the past month. And on Wednesday, state Sen. Gustavo Rivera, the Democratic chairman of the health committee, said that the time had come for the Legislature to take action, “hopefully sooner than later.”

“We need to remind them that state government is not one big branch: There’s three of them,” he added.

The tension was laid bare Wednesday, with Cuomo attacking critics, singling out Assemblyman Ron Kim, a Queens Democrat, who said the governor had threatened him last week — an accusation the governor’s staff said was a lie.

Earlier this week, a group of Assembly Democrats, including Kim, circulated a letter among colleagues seeking support for the revocation of Cuomo’s powers that suggested the administration had broken federal law — an accusation the governor stridently denied Wednesday.

That came just days after 14 Senate Democrats signed a statement saying that “it is clear that the expanded emergency powers granted to the governor are no longer appropriate.”

Senate leaders now intend to pass a bill that would limit the governor’s ability to supersede state laws to combat the pandemic and would establish a 10-person commission, made up of members of the Assembly and Senate, to evaluate any future pandemic-related directives by Cuomo, as well as suspensions of laws.

The move to shift some of the governor’s authority to state lawmakers, many of whom are working remotely from their home districts, has raised concerns among some dissenting Democrats about hampering the state’s ability to make quick decisions as it continues to battle the coronavirus, which has killed more than 45,000 people statewide.

But the Senate majority leader, Andrea Stewart-Cousins, a Westchester County Democrat, said that her chamber’s actions reflected the changing nature of the pandemic.

“I think everyone understands where we were back in March and where we are now,” Stewart-Cousins said. “We certainly see the need for a quick response but also want to move toward a system of increased oversight and review. The public deserves to have checks and balances.”

It is still unclear if the Democrat-dominated state Assembly will follow the Senate’s lead; members from both parties have introduced bills that would give the Legislature different degrees of oversight over the governor’s decisions. Moreover, any bill passed would need to be signed by the governor himself, though with supermajorities in both chambers, Democrats could override any veto. Republicans in the minority have also called for the governor’s powers to be revoked.

The governor has defended the use of his emergency powers, arguing it had “nothing to do with nursing homes,” and noting that the Legislature already has the authority to reverse any of the governor’s executive orders — a step lawmakers have yet to take.

The move to rein in the governor is striking considering Cuomo’s outsize influence in the Capitol, where he has served as governor for more than a decade.

The past month has been one of near-constant turmoil for the administration, as the official count of deaths of residents of nursing homes and long-term care facilities has almost doubled — from about 8,500 to more than 15,000 — in the wake of a scathing report in late January from the state attorney general, Letitia James, suggesting a major undercount of the toll.

Questions surrounding the governor’s handling of nursing homes have percolated since last spring, with particular interest in a March 25 guidance memo that compelled such facilities to admit or readmit people who were positive for the virus. Cuomo has said that memo followed federal guidance and was implemented for fear that hospitals would be overwhelmed with patients.

New York was not the only state to omit hospital deaths, but the decision led to speculation that Cuomo was artificially suppressing the number to support both his policies and his growing national political profile, assertions he has rejected.

Instead, for months, Cuomo continually touted New York’s performance — saying its nursing homes had done better than most other states — while still resisting requests for a complete death toll from lawmakers, the public and the media.

Finally, however — after a top aide was recorded last week admitting the administration had purposely withheld the data in the face of an investigation by the Trump Justice Department that it feared would be politicized — the governor acknowledged Monday that there had been “a delay” in telling people the full story.

“I understand the public had many questions and concerns,” he said, adding, “And I understand that they were not answered quickly enough.”

Cuomo, known for a combative political style, said the decision was “a mistake,” but stopped short of a full apology.

“We made a mistake in creating the void,” Cuomo said Monday, referring to a lack of public information that opened his policies up to questions. “We should have provided more information faster.”

The inquiry by the FBI and Brooklyn prosecutors — first reported by the Times Union of Albany — does not appear to be related to the Trump Justice Department’s investigation, which was being conducted by its civil rights division.

Cuomo and members of his administration have previously come under scrutiny by federal prosecutors in Manhattan in connection with contracts distributed in the Buffalo Billion development project and with Cuomo’s abrupt shutdown of a commission to investigate public corruption.

But this inquiry may have landed with prosecutors in Brooklyn because the U.S. attorney in Manhattan, Audrey Strauss, who has been in place since June, would have a possible conflict: Her son, Matt Wing, is married to DeRosa.

Federal investigators have been in contact with the Cuomo administration about the inquiry, one of the people familiar with the matter said.

Richard Azzopardi, a senior adviser to Cuomo, said the administration was cooperating with the investigation.

Assembly Democrats met by video stream Friday to discuss whether to extend or revoke the governor’s powers, or allow them to expire April 30. No decision was made, and there are lingering concerns over how effectively the Legislature could craft virus-related mandates.

Michael Whyland, a spokesperson for the Assembly speaker, Carl Heastie, noted that Cuomo’s emergency powers would soon expire, adding that the Assembly Democrats would “continue to discuss the issue and will act responsibly with the best interests of the people of the state of New York in mind.”

Even so, the Senate’s bill — as well as a vocal faction of members in the Assembly that supports fully repealing the governor’s powers — has placed pressure on Heastie, a Bronx Democrat, to respond.

Assemblywoman Yuh-Line Niou, one of the few Democrats who voted against granting the governor emergency powers last year, said it was time for lawmakers to “take back our legislative power.”

Cuomo’s sweeping powers were granted March 3, just two days after the first reported case of the coronavirus in New York.

The governor has since signed dozens of orders that have overridden laws and regulations his administration viewed as impeding its response to the public health crisis. He mandated business closures, established “microcluster” zones with different restrictions, imposed quarantine requirements on travelers and even changed the date of the presidential primary.

Some lawmakers said that while they favor limiting the governor’s powers, they’re opposed to a full repeal, which they say could lead to the rollback of important executive orders he has signed to respond to the pandemic and place undue burden on the Legislature.

“We need to be very thoughtful about what we’re going to do, and I think we need have to have some reasoned dialogue in this process,” said Assemblyman John T. McDonald, a Democrat. “The approach should be to use a surgeon’s scalpel to really be precise, as opposed to using a sledgehammer and blowing up the entire process.”

But Rivera said that the governor would retain other emergency powers to help manage elements of the state’s response. He also noted that legislators “are policymakers” and can respond to rapidly evolving situations. Covid-19 Could Also Give You Neuro Issues

Mass. reports 541 new COVID-19 cases among students, 397 among school staff across the state