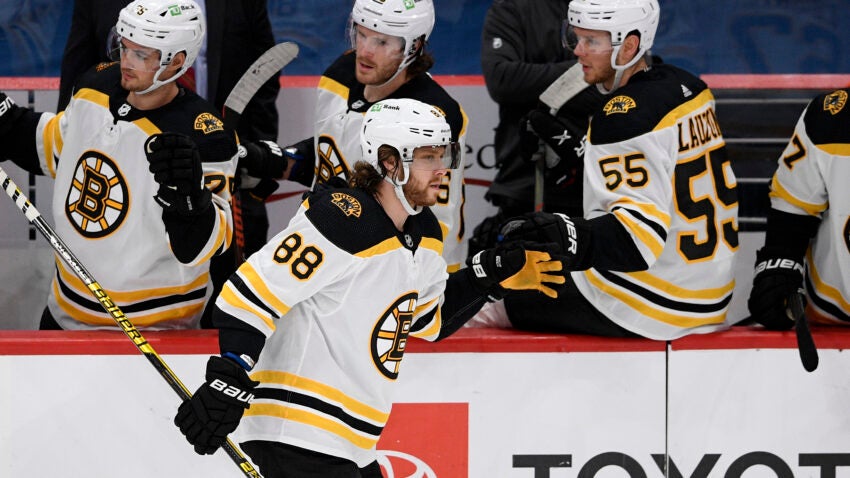 WASHINGTON (AP) — David Pastrnak scored his first two goals of the season before Craig Smith tied it, Brandon Carlo scored the go-ahead goal and the Boston Bruins came back to beat the Washington Capitals 5-3 on Monday night.

Boston rallied from a 3-0 deficit for the second game in a row against Washington. After losing Saturday on Alex Ovechkin’s overtime goal, the Bruins finished the job this time as Carlo beat Vitek Vanecek with 2:37 left in the third period and Brad Marchand sealed it with an empty-netter.

Pastrnak was playing his second game after undergoing offseason hip surgery. He and Ovechkin tied for the NHL lead in goals last season.

Washington lost in regulation for the first time this season, ending its franchise-best point streak to start a season at nine games. The Capitals lost another regular to injury when winger Conor Sheary limped off late in the third period.

The Florida Panthers, who have played only six games this season, are the league’s last unbeaten team in regulation.

Former Bruins captain Zdeno Chara scored in his second game against his old team. Chara and Daniel Sprong combined for two goals in 11 seconds, John Carlson scored on the power play and Jakub Vrana had two primary assists after being demoted to the fourth line.

Tensions between these teams boiled over in the third period when well-established Capitals tough guy Tom Wilson and big Bruins rookie Trent Frederic dropped the gloves. It was each player’s first fight of the season.

While defenseman Dmitry Orlov returned from a five-game pandemic protocol absence, Washington was without goaltender Ilya Samsonov and center Evgeny Kuznetsov for a sixth consecutive game. They did not skate with the team and remained on the NHL’s COVID-19 unavailable list.

Coach Peter Laviolette said Kuznetsov and Samsonov are still in quarantine. Center Lars Eller missed his third in a row with an upper-body injury and defenseman Justin Schultz his second after taking a puck to the face Thursday.

“I saw Schultz at the rink, and I talked to him,” Laviolette said. “He’s doing good. He remains day to day. … I think there’ll be a process to it. You guys will probably see it as it starts to unfold on the ice.”

Bruins: Travel to Philadelphia for games against the Flyers on Wednesday and Friday.