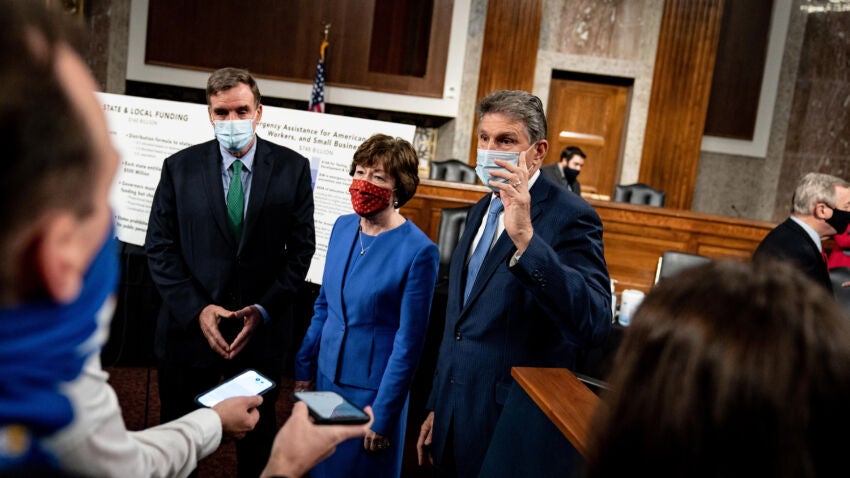 A bipartisan group of lawmakers met virtually with administration officials on Sunday to discuss vaccine distribution and elements of President Joe Biden’s $1.9 trillion stimulus plan, pressing for a more targeted approach as the administration works to address the country’s faltering economy.

The discussion with members of the Biden administration, including Brian C. Deese, director of the National Economic Council, Jeffrey D. Zients as the official COVID-19 response coordinator and Louisa Terrell, head of the White House Office of Legislative Affairs, focused on how Biden and his team settled on the overall figures and whether the administration could provide additional data to corroborate the proposal.

Lawmakers in both parties raised the prospect of curtailing elements of the proposal, including the eligibility for a suggested round of $1,400 checks and ensuring that it was a more targeted distribution of the additional aid, according to multiple people familiar with the discussion.

The $1.9 trillion proposal Biden announced this month is more than twice the size of the package Congress approved in the final month of the Trump administration, and it is designed to build on that package with additional aid for state and local governments, $1,400 stimulus checks and increased unemployment benefits.

But while members of the Biden team have said they intend to push for Republican support, several Republicans have signaled reluctance to approve another sweeping rescue package after pouring more than $3 trillion into economic recovery in the last year.

And with the second impeachment trial of former President Donald Trump set to begin in the coming weeks, Biden’s proposal could be further stymied. The Senate trial will require considerable time each day.

The Zoom call with more than a dozen lawmakers lasted for more than an hour, with Sen. Angus King, I-Maine, noting that it was held Sunday afternoon “in the middle of the playoffs” and indicated that “people are acting in good faith” in working toward an agreement.

“There was a genuine desire on the part of the White House to achieve a bipartisan proposal,” King said. On the call, he added, “you wouldn’t have been able to tell who was which party.”

Providing additional funds in order to improve vaccine distribution was among the issues that had the most bipartisan support.

“It’s clear that virtually every state is having difficulties with getting the vaccine out and that additional funding is needed,” Collins said in an interview. She said she personally raised the issue of supporting rural hospitals, which have incurred additional costs for administering the vaccine in Maine.

It is unclear, people familiar with the discussion said, when the administration would provide the data lawmakers requested to justify the proposed funding levels, how the proposal would advance through both chambers, and whether there would be another conversation with the group in the coming days. King also said it was unclear whether some of the funds would be repurposed from previous pandemic packages.

“They were pretty noncommittal in general, I would say, but to be fair to them, this was their opportunity to hear from us,” Collins said. “I appreciate that they were willing to outline their plan in more detail — if there is going to be a bipartisan COVID package, it’s really important that they hear the concerns” of lawmakers.

There was also discussion about the administration’s proposal for funding schools, state and local governments and child care.

Karine Jean-Pierre, the principal deputy White House press secretary, said on Sunday that “we’re going to continue making that bipartisan push and that bipartisan effort” and that the meeting would be one of many efforts to corral support for Biden’s proposal.

But in an acknowledgment of Republican resistance to spending billions of taxpayer dollars, Democrats have signaled a willingness to turn to the reconciliation process — a budgetary mechanism that would allow Democrats to pass the legislation with a simple majority and bypass the usual 60-vote threshold needed to advance legislation.

“What we cannot do is wait weeks and weeks and months and months to go forward — we have got to act now,” said Sen. Bernie Sanders, I-Vt., who will head the Senate Budget Committee, on the CNN program “State of the Union.” Mass. reports 624 new COVID-19 cases among students, 345 among school staff across the state