With more stimulus expected, government forecasts growth of between 4-6 percent in 2021, but recovery seen as ‘uneven’.

Singapore reaffirmed its forecast for a rebound in economic growth this year after its worst annual contraction since independence, signaling the recovery is on track while more stimulus expected in this week’s annual budget presentation will provide further support.

The Ministry of Trade & Industry on Monday maintained its projection for growth in a range of 4% to 6% for 2021, seeing a faster rollout of the vaccine in advanced economies while the U.S. and Europe could achieve population immunity in the second half of the year. Those gains could be offset by a bleaker regional outlook with the resurgence of the virus in some countries.

“The Singapore economy is projected to see a gradual recovery in 2021,” with gross domestic product not expected to return to pre-Covid levels until the second half of the year, Gabriel Lim, permanent secretary at the ministry, told reporters Monday. “The pace of recovery is also expected to remain uneven across sectors.”

Trade-reliant Singapore took a beating last year, shrinking 5.4%, the MTI said, revising its preliminary estimate from last month for a 5.8% contraction. The aviation, transport and hospitality sectors have suffered from the tourism standstill and mobility restrictions — and are expected to remain weak this year, Lim said — while financial and professional services were more resilient during lockdown and the aftermath. 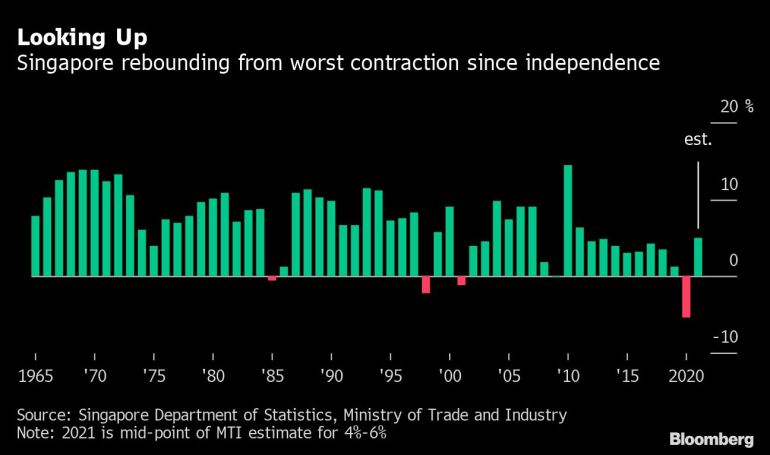 “There were upward revisions to all sectors, notably in construction and services,” Khoon Goh, head of Asia research at Australia & New Zealand Banking Group in Singapore, said of the GDP report. However, he noted, the data have “little implication for monetary policy,” and he expects the Monetary Authority of Singapore to remain on hold all year.

Singapore’s daily locally transmitted virus cases have hovered close to zero for the past several weeks, encouraging plans to welcome more visitors this year under varying security arrangements, while others in the region, including Indonesia and Malaysia, are battling surges that are exacerbating their economic pain.

Economists in a Bloomberg survey predict Finance Minister Heng Swee Keat will announce another fiscal deficit when he unveils details of the upcoming financial year budget on Tuesday, which is expected to include targeted support for vulnerable households and businesses.

Singapore’s government said last week that its five stimulus packages announced in 2020, coupled with loose monetary policy, saved the economy from a contraction of 12.4% or more last year.